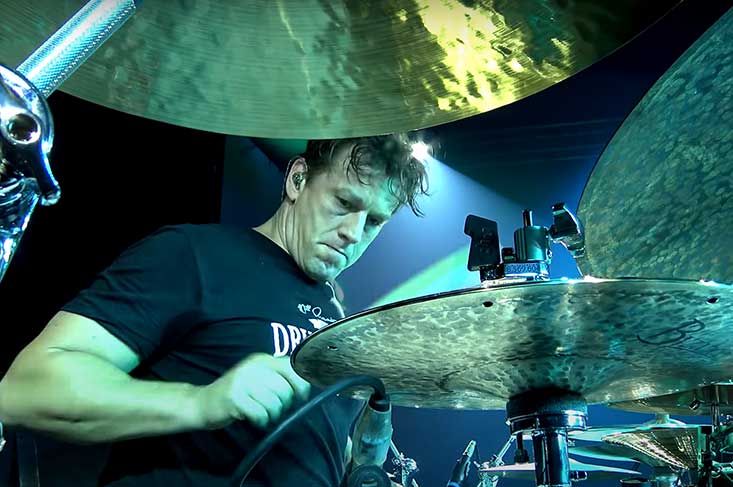 If you have been a drummer for a couple of years you have likely come across the name Thomas Lang. He is a household name in the drumming community. That is for good reason.

Thomas Lang is a prime example of how dedication and hard work can lead to you becoming a master of your craft.

Let’s find out more about Thomas Lang and what makes him such a great player.

Who is Thomas Lang?

Thomas Lang is a professional drummer from Vienna, Austria born on 5th August 1967. Thomas started playing the drums at the age of five he took a combination of lessons at his school and private tuition. Thomas later went on to study at the Vienna Conservatory of Music.

From then it was time to go from studying to creating a career. Thomas began working with various artists in Europe in the 1980s recording and touring. He later moved his base of operations to London, UK as his career grew and became global.

Thomas is still touring and recording with musicians internationally as is currently based in California, USA.

Artists Thomas Lang has played for

As well as working with an impressive amount of artists, Thomas Lang has also released several solo albums and collaborations.

Thomas Langs latest solo release, Progpop, shows some of some his incredibly creative playing. The album combines intricate drum patterns combined with many different genres covering and not limited to pop, rock, prog and fusion.

As well as listening to this album I also suggest watching some of Thomas’s playthrough videos. You don’t quite realize the complexity of the parts until you see them.

Here is the playthrough of Time from Progpop.

Thomas Lang has been winning drum awards since the 1990s. He has won them from the largest global drum magazines including Drum Magazine, Rhythm magazine, Modern Drummer Magazine and many many more.

Here are some of the awards he has won.

What is unique about Thomas Langs playing?

I remember the first time I saw Thomas Lang perform a clinic back in the early 2000s. I was blown away by his playing. Immense power, speed, dynamics and limb independence. It is hard to take it all in and without seeing it you would struggle to believe it is one person behind the kit.

Thomas Lang is an advocate for being able to play everything he can with his hands with his feet. This is no easy job and has taken many hours, day and years to get to his level. This does put Thomas in a league of his own when it comes to the variety of things he can do behind the kit. He has more limbs and sound choices than most professional drummers.

From this image here you can see there are a lot of pedals compared to the average drum kit. On the left side he will typically have a snare sound, a crasher sound, hi hat and bass drum.

Having all the chops doesn’t mean Thomas doesn’t have the groove. Like all pro drummers, Thomas knows the groove pays the bills. That is a drummer’s key job and he certainly delivers.

Learn how to play the drums like Thomas Lang

Thomas Lang has a collection of learning resources that are worth looking into. As Thomas is a very advanced player, his DVDs are pretty intimidating at first. The DVDs are broken up nicely to not overwhelm you though. They are broken up into music performances, drum solos and interviews. It is unlikely you will learn everything on these resources but there are some great nuggets to take away.

They helped me immensely in my earlier days of double bass playing and they are very inspiring to see where you can get if you put in the hard work.

Thomas also has a dedicated online school at www.thomaslangsdrumuniverse.com and often appears on other online drum tuition websites. Check out this lesson he did for Drumeo. In this 1 hour lesson, you will pick up days of things to work on to improve your drumming.

In 2007 Thomas introduced the “Drumming Bootcamps” which were the first of his kind. At these events, you attend a camp hosted by Thomas were you would learn from him and guest drummers. Over 120 of these in 35 different countries were hosted.

In 2011, Thomas launched The Big Drum Bonanza. This event happens once a year in Los Angeles and each year some of the worlds best drummers appear alongside Thomas to teach you.

If you have watched any of Thomas’s DVDs you will know that he has some monstrous drum kits. Although he doesn’t always play a kit this size, his endorsed brands are consistent.

Thomas Lang has a range of signature products including sticks and a selection of Meinl cymbals. I don’t know any drummers that have released as many signature cymbals as Thomas. It is a real testament to his innovation with the instrument and drive to find his unique sound.

These are very fast chinas made out of a custom alloy. They are perfect for accents in fast fills and grooves.

This is a fast cutting stack made with two B10 Classic Custom cymbals. It is made up of a china and a crash both with holes cut into the cymbals. It has a deeper sound as far as stacks go.

These are a great sounding pair of hi-hats. As mentioned in the title and like most of the Thomas Lang signature cymbals, these have a fast sound. They also have a nice clear stick definition. The hats are made of two different finish cymbals. A brilliant on the top and a dark finish on the bottom. Both the top and bottom cymbals also feature eight small holes around the edge of the cymbals. These are available as either 13″ or 14″.

If you are looking for a fat and heavy stick, look no further. These signature sticks are fatter and heavier than the average stick. Almost a 2B on steroids. They also feature an overside tear drop tip for extra stick definition. The white finish also gives these sticks a great aesthetic. These sticks aren’t for the faint-hearted.

This is a great pad for on the road or for at home. It is the same as other practice pads offered by Meinl but it comes with the Thomas Lang graphics. The pad has a rubber bottom to stop it from moving on a flat surface or it can be mounted to any standard size cymbal stand.

If you like this pad but are looking for an option with different graphics, we recommend checking out the Benny Greb practice pad from Meinl.

Where can I find more

Thomas is available all over the web! Make sure you check out more from him on the links below.

Thomas Lang is a superhuman drummer. He seems to have it all and it is a sight to behold when you see him perform. The scary thing is that he still seems to be getting better. Can he not give us a chance to catch up? 😛

He has been a huge inspiration to me and thousands of drummers around the globe. A true ambassador for drumming and drummers.