Luke Holland | From YouTube drummer to a world-touring pro 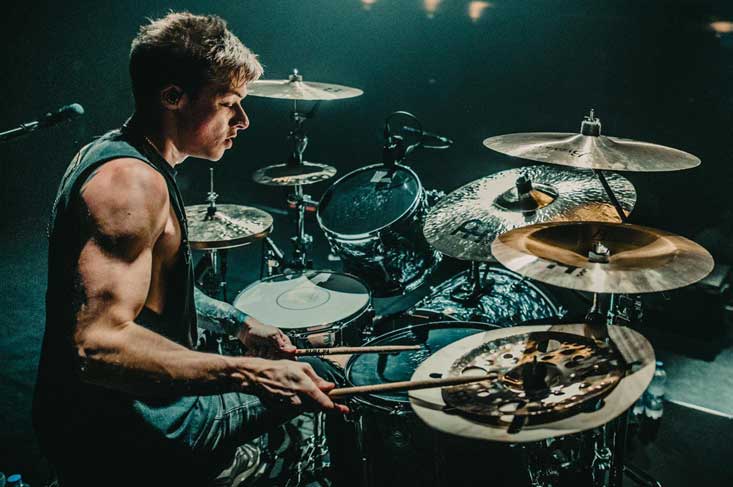 Luke Holland is arguably one of the biggest success stories of a drummer uploading videos to YouTube to becoming a full time professional. His journey has inspired countless others to follow his journey and attempt to replicate his success.

Let’s find out more about Luke Holland and his journey to becoming a professional drummer.

Who is Luke Holland?

Luke Holland is a drummer from Peoria, Arizona, the USA born June 14, 1993. He has been playing since the age of 10 after been inspired by his neighbours playing. Luke is a self-taught drummer and played snare in his high school marching band.

At the age of 15, Luke played with a local band Oceans Will Part. Luke did one recording with the band called Obsidian Resolve, a self-release from 2010.

The following year from joining Oceans Will Part, Luke decided to take to YouTube to promote his drumming. He started his channel in 2009 and called it LukeHollandDrums. At this time YouTube was very popular among drummers but no one had leapt from a YouTube drummer to a full time professional. Luke would become one of the first to buck this trend.

Apart from the tight playing, Luke had an extra element to get peoples attention. Stick tricks. And a lot of them. Stick tricks can be divisive among drummers but they helped Luke stand out from the crowd. And let’s be honest, fitting that many stick tricks into some of those metalcore songs aren’t easy.

In 2010, Luke Holland filled in on drums for the band Texas In July. A year after starting his YouTube channel, this must-have given Luke the drive to continue down this path. It was also around this time Lukes YouTube channel also gained traction going from 1,000 subscribers to a rate of growth in the 1000’s per month.

Today the channel LukeHollanddrums has over 650K subscriber and over 104 million views!

Full-time gig with The Word Alive

After a few years of grinding Luke Holland landed his first full-time gig with the band The Word Alive. He joined the band in early 2012 as their full-time drummer.

With The Word Alive, Luke did a lot of touring around the world and recorded two albums with the band. “Real” in 2014 and “Dark Matter” in 2016.

This is an incredible experience for a drummer who had primarily focused on YouTube to that point. In late 2016, Luke decided it was time to leave the band to focus on session work (recording and live) as well his YouTube channel and teaching.

Since leaving The World Alive Luke has had a successful transition into a session player. Most notably, he has recorded for I See Stars on the album “Treehouse” and Jason Richardson on “I”.

The Jason Richardson recording was especially influential on Luke going from a professional drummer to a standout. The album “I” is a technical metal masterpiece and is packed with intricate and complex drumming. Luke also toured with Jason around the globe and as well as performing on notable drum platforms such as “The Drum Channel”.

What is he up to today

Luke still uploads content to his YouTube channel and has become what I would class as a drum ambassador. His is a known name amongst almost all drummers, appears at drum clinics around the world and has his signature product lines.

Luke has appeared on all the major drum tuition websites including The Drum Channel, Drumeo and 180 Drums.

He is known as a drummer and isn’t just seen as a member of a band (not that there is anything wrong with this). This is something that isn’t easy to achieve and Luke Holland has achieved this in record time.

Luke Holland has started releasing his own music in 2020. Currently he has two singles out “Katana” and “Who Can I Trust”. These songs are not what you might expect from him. The songs are hip hop and don’t focus on the drums as you might expect.

The songs are catchy and are worth checking out. It will be interesting to see where Luke takes this going forward.

What gear does Luke Holland use?

Luke has numerous endorsements from the top drum companies.

Here is a picture of a typical live setup.

As a popular drummer, Luke has some signature products. Let’s take a look at what is currently available.

This stack is Lukes signature cymbal with Meinl. It is a combination of a 12″ Classics Custom B10 cymbal and a 16″ Byzance B20 cymbal both of which are vented. The stack has a very fast attack whilst still being musical. It is perfect for sharp accents in grooves or quick fills.

Luke’s signature sticks from Meinl Stick and Brush sit between a 5A and a 5B. We have a full article looking at these in-depth that you can check out here.

Luke also has a range of merch. This includes hoodies, shorts, sweatbands and more. To check these out you can visit his MerchNow site.

Luckily you can find Luke all over the internet! Check out more of him on the links below.

Luke is a prime example of how dedication and hard work can make you turn the drums from a passion to a full-time career. The best thing about it is that you put in the effort, this is something that anyone can achieve. Luke has created the template, you just need to follow it.

There is no doubt about it, Luke is a great player and has become a household name in the drumming community. We can’t wait to see his drumming improve even more and where his journey takes him next.