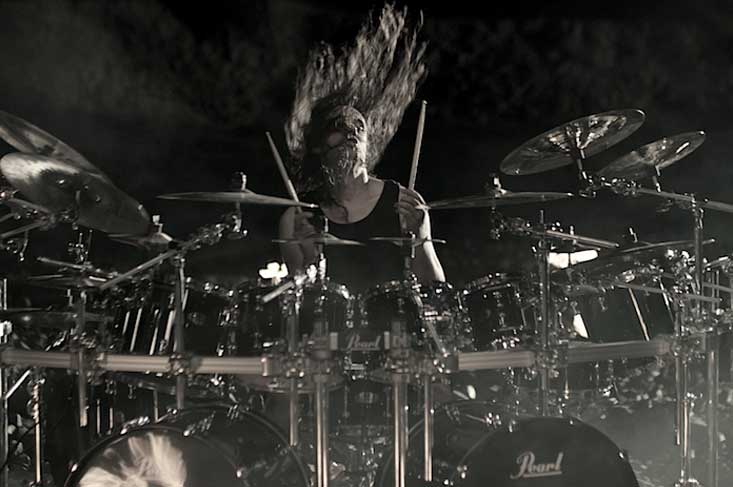 If you are into death metal you have likely heard of George Kollias. His drumming is pushing the boundaries of blast beats and double kick to new levels of speed.

Let’s find out more about George Kollias and his drumming career.

Who is George Kollias?

George Kollias is an extreme metal drummer born on the 30th of August 1977 in Korinthos, Greece.

Before George started the drums, he did play the guitar for two years. This is something that will help him later in his career.

At the age of 12, George got his first drum kit. In 1990, he began taking lessons with Vasilis Baxevanakis and then learning from the jazz drummer Yannis Stavropoulos in 1999.

In the late 90’s George joined his first band Extremity Obsession. Like most musicians first bands, they played some local shows and recorded some demos but had no great success.

Nightfall allowed George to get some great experience under his belt. During his time in Nightfall, he recorded the albums “I Am Jesus” and “Lyssa – Rural Gods And Astonish Punishments”.

Nightfall also played a lot of shows around Europe including one of the worlds biggest metal festivals, Wacken Open Air.

Sickening Horror was formed by George and was his first extreme metal band. The band recorded a promo CD in 2003 with the debut album “When Landscapes Bled Backward” coming out in 2007.

Taking on a selection of projects during this period grew George’s reputation as a drummer.

In 2004, Nile found themselves without a drummer after Tony Laureano quit the band. To help find the new drummer they called on extreme metal drumming heavyweight Derek Roddy for some help.

Derek sent the band some videos of George Kollias and recommended they reach out to him. The band did and in August 2004, George Kollias joined Nile.

At the time Nile was a very well established band and had already released three albums and was keen to get working on the next one.

George flew out to America and worked with the band for two months writing Annihilation Of The Wicked before heading to the studio to record.

Straight after this, the band headed out on a world tour that covered many of the largest metal festivals. This included Wacken Open Air, Graspop Metal Meeting and Hellfest in Europe as well as Japan’s Loudpark and the legendary Ozzfest in the US.

Being a part of Nile has increased the profile of George Kollias allowing him to do drum clinics and festivals around the world as well as successful instructional DVDs.

In 2008 George Kollias released his first instructional DVD, Intense Metal Drumming. As you can imagine from the name of the DVD and George’s playing, this shows you everything you need to become an extreme metal drummer.

The DVD was very successful and was quickly followed up by Intense Metal Drumming II in 2012 that featured even more in-depth advanced metal drumming.

As well as being a great player, George is an excellent instructor making even the most complicated exercises easy to follow.

George also released his first book in 2014 called The Odyssey Of Double Bass Drumming. This is set to be a trilogy all focused on double bass drumming. Each book released will go into more complex details than the previous.

George also offers online lessons and private lessons via Skype. You can find all the information you need for these on his website.

In 2015 George Kollias released a solo album “Invictus”. On this album, George recorded every instrument allowing him to showcase his talents on the guitar from his pre-drumming days.

The album was received well among the metal community and Kollias has hinted on his Instagram that he is working on new music.

What is unique about his playing?

If you have listened to George Kollias playing the first thing you will notice is the mind-blowing speed. His hands and feet are blisteringly fast and extremely precise.

When you see George’s feet you will quickly notice that he is using the swivel technique and he is a master at it. The tip of his feet remains on the pedals with the speed coming from the left and right ankle motion over the pedal.

For those that are blast beat aficionados, you will see George always does a single foot blast. This is the preferred method of old school death metal drummer but is becoming less popular as younger drummers are emerging.

Using a single foot bast does give Kollias some room to be creative. Even whilst blasting at extreme tempos, the left foot is free to play unique patterns and ostinatos.

This gives a lot of George’s parts a unique feel which can be difficult to come across in extreme metal.

George takes this a step further with his handwork. Whilst some parts need a straight-up blast beat, George creates various beats that sit over the main blast beat.

An example of this is playing a blast beat on a secondary snare and using the main snare to hold a backbeat.

George Kollias has a massive drum kit. It features multiples of everything you would expect on a drum kit.

The size of the kit does serve a purpose allowing George to add as much flavour into his blast beats as he wants.

Due to his global popularity, George also has some signature products.

These sticks sit in the spectrum between a 5A and a 5B. These sticks also feature a barrel tip for extra cymbals definition and drum tone.

Axis pedals are known for their speed and are a perfect match for George’s playing style.

George has created his beater with Axis and these are featured on this signature pedal. The pedal also comes equipped with all the premium upgrades offered by Axis.

Keep up to date with Kollias

The are multiple places you can follow George online. Check out the links below:

There is no doubt that George Kollias has had a great impact on what extreme metal drumming can be. The combination of speed and creativity has given Kollias a unique voice behind the kit.

George has taken extreme drumming from something metal fans are into, to the global drumming mainstream with his clinics and festival appearances.

So many of the younger metal drummers have been inspired by George Kollias and it is great to see extreme forms of playing becoming more common.

I can’t wait to see what George Kollias gets up to next and how else he can push the boundaries of extreme metal drumming.