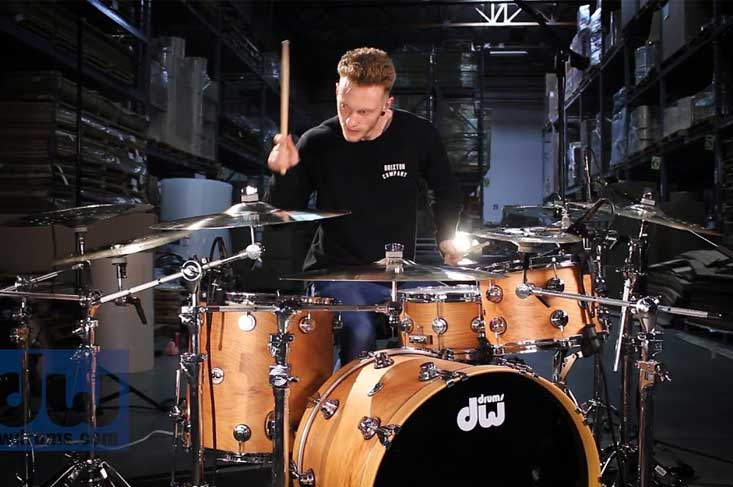 Chris Turner is a professional drummer known for his insane accuracy and power at the drum kit. Chris makes complex metal drumming parts seem simple with his flawless playing.

Let’s find out more about the drummer, Chris Turner.

Who is Chris Turner?

Chris Turner is a drummer from Birmingham, United Kingdom born on the 26th September 1993. Chris first discovered the drums at the young age of 4 at the first concert he went to. The drummer that night was his dad. He instantly decided he wanted to become a drummer.

As Chris’s dad played the drums he initially tutored him for the first few years. This worked fine at the early stages but when learning from a family member there is no structure to what you work on. To help improve his drumming he Chris took lesson for three years at the local drum centre in Birmingham before stopping at the age of ten.

Chris’s dad wasn’t the only musical member of the family though. Almost all members of his family played some form of instrument and this allowed him to gain a strong understanding of music, not just the drums. Something that would benefit him in the long run.

One of the benefits of being from a musical family was the ability to jam with other musicians at such a young age. Something that many other musicians don’t experience until their teen years.

And with having a musical family, they were of course very supportive of Chris actively pursuing drumming.

More than just a metal drummer

Growing up Chris mostly listened to groove focused music as that is what his dad played. Bands such as The Matthews Band, Sting and The Police.

It wasn’t until his later year Chris discovered heavier music with the stand out being Linkin Park. But this was just the start of the rabbit hole.

Chris Turner later came across the band “Between The Buried And Me”. They play progressive metal music that is technical and full of drumming Chris has never heard before. Although not initially a fan of the vocals he pushed through to pursue the challenging drumming he hadn’t heard before. Blast beats, breakdown and double kick patterns.

These became new parts he wanted to learn and master before discovering the next more challenging metal band.

Although that became an obsession Chris doesn’t consider himself just a metal drummer. He lists his top influences as drummers such as Chris Coleman and Jojo Mayer. When he’s at home he rarely listens to metal and mostly listens to jazz or chill out music.

Chris Turner is a founding member of the band Oceans Ate Alaska along with four other friends at Birmingham University. Although the band was formed in 2010 it has been around since approximately 2007 under a different name on the local scene with members coming and going before the decision to change the name and take the band seriously.

The band initially released two single “Taming Lions” and “Clocks” which gathered almost overnight traction receiving millions of plays and plenty of media attention. The band used this momentum to release EPs “Taming Lions” in 2011 and “Into The Deep” in 2012.

The success of these EPs gained them interest from Fearless Records, signing with them in 2014 and releasing the debut album “Lost Isles” on the 24th February 2015.

From here the band went on to tour across the USA and Europe to support the album.

On the 28th of July 2017, the band released the sophomore album “Hikari”. This album was heavily inspired by Japanese culture and saw the band go in some unexpected music directions. This gave Chris the chance to use brushes and jazz drums on certain sections. Something was not often seen on metal albums.

One of the main things to note about Chris’s role in Oceans Ate Aleska is that is more than just the drummer in the band. He does all of the pre-production and engineering on the music they release. As the band is also very drum focused, Chris writes the majority of the rhythms on the songs. The writing process is still very collaborative but he likes to class himself as the primary composer.

As well as working on Oceans Ate Aleska Chris has taken on a brand new project. His solo album “Steezy”. This is described as a unique and daring album for heavy music lovers.

Chris used the platform Indigogo to fund the project smashing his goals and successfully funding the project. Chris states that the album “Steezy” will first be released as an instrumental album with a version featuring vocals to follow in the future. So far Chris has released two tracks. “40 Roll” and “Triggered” featuring Thomas Lang.

Check them out here

The reaction to these songs has been huge with them receiving hundreds of thousands of plays already.

It has also been interesting to see the drumming community reacting to the videos. The tracks have become a must-have video on the “drummer reaction” style videos that are popular at the moment. These have without doubt helped spread the popularity of the tracks.

Chris has also been smart with the release of the track Triggered. He gave pre-access to select YouTubers so they could drop their reaction videos at the same time as the main video. This helps spread the hype and interest in the new release with very little time and effort needed from Chris. This is a very smart move and I am intrigued to see if more people follow this trend going forward.

Chris Turner has also performed on other tracks and albums, most notably for I Am Abomination.

Chris also does engineering for other bands when he isn’t on the road.

What is unique about Chris Turner’s drumming?

When you first see Chris Turner play the drums you are going to notice that his style is unique. When you watch him play it is like watching a robot and he does look a little awkward.

He has a pure concentration on what he is doing and has a death stare focused on what needs hitting next. He also looks a bit stiff and tilts his head to the side. You have to see it to appreciate it.

When you get past how he looks at the kit you will start to appreciate the extreme accuracy of everything he is playing. The notes are almost perfectly placed, you would have to slow down his playing to notice any inaccuracy. It is impressive.

You will then notice how smooth and consistent his dynamics are. They are so consistent Chris seems to be constantly defending himself again the use of triggers and sampling his drums. Chris himself isn’t a fan of triggers and likes the natural sound of the drums. It is easy to see why drummers may think he is using something to enhance his sound as it is that good.

When you watch Chris play you can see the power he is hitting his kit with. Especially the bass drum. In the fast sections, you can see him pushing himself off his throne from the downwards force.

To see how Chris Turner develops his bass drum speed and power watch this clip from his Instagram.

When he practices on a pad he doesn’t use any pedals. He just uses his feet. This way he isn’t dependent on a pedal. All the power and accuracy is coming directly from him.

Chris Turner has a fairly minimal drum set when it comes to the drums. One tom, one floor tom, one snare and one bass drum. The cymbal selection is more elaborate and does vary between projects.

When you see Chris’s setup you will notice that everything on the kit is very low and Chris sits very high. He likes to sit high to make playing the kick easier. When sitting high he can focus more on the downwards motion rather than having to raise his leg for each note.

Because he is sitting so high you will also notice that some of the cymbals are facing away from him. This is so that when he strikes he is still hitting the cymbals correctly. If the cymbals were flat he would be hitting them with the tip of the stick rather than the shoulder of the stick.

You can find Chris in several places. Check out the link below:

Chris Turner is an extremely impressive drummer. You know you are doing something pretty special when people can’t believe what you are doing is real. His power and accuracy is something every metal drummer wants.

I can’t wait for the release of “Steezy”. I’m looking forward to seeing what other drummers feature and how crazy the drumming gets. Hopefully, the release of this solo album will give Chris the chance to perform it and appear at more drum festivals and clinics.

We can’t wait to see what comes next for Chris Turner.