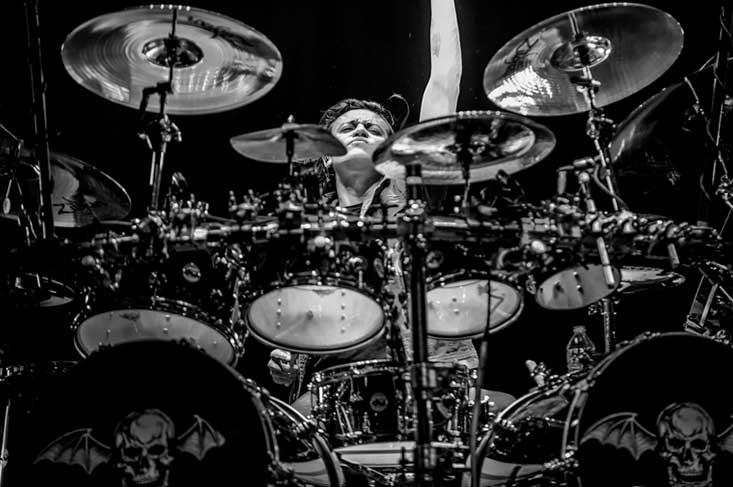 Arin Ilejay has been on a rollercoaster ride in his drumming career so far. From breakout scene band Confide to globe touring giants Avenged Sevenfold and everything between.

Let’s find out more about Arin Ilejay has his drumming journey so far.

Arin Ilejay (Richard Arin Ilejay) is a drummer born on the 17th February 1988 in Palmdale, California, USA. Arin is most recognised for his time in the band Avenged Sevenfold.

At a young age, Arin was introduced to music by his father who was a session guitarist. At age 10 Arin began to learn the drums at his local church where he progressed to play worship services. This introduced him to playing with other musicians at a young age.

In school, Ariv did join the jazz band and marching band. Although his real passion did lie behind the drum kit. Luckily his father did own a music store and was kind enough to create a small space for Arin to practice. This small space became the place where Arin would practice, develop as a drummer and play along to bands that inspired him. Arin learned “Unholy Confessions” by Avenged Sevenfold in this space unaware he would one day be playing with them.

Arin Ilejay has had a varied career since his days of playing in his practice space.

At the age of 19, Arin joined the band Confide through mutual friends. Arin recorded drums on the debut album “Shout The Truth” that released in 2008. The remainder of 2008 was spent touring with Confide to promote the album.

In January 2009 the bands recorded label Science Records was eliminated by its parent company, Warner Bros. Records. This left the band without a label and an uncertain future.

Arin wanted to become a family man and an uncertain future with the band wouldn’t be able to support these aspirations. Arin decided to leave the Confide in 2009.

As an artist for TRX Cymbals during his time in Confide he had an in with them for a position. Arin became Artist Relations Manager in February 2009.

Arin loved the products and knew a lot of artists through his time on the road. It was a perfect match and a great move for Arin and TRX.

Arin seemed to be happy with this role until a bigger opportunity came knocking.

In 2010, Arin was approached by Mike Fasano with an opportunity. Arin knew Mike through recording the Confide debut album. Mike was the drum tech for the album to help Arin get the best sounds possible.

When Mike originally reached out, he explained to Arin he had a great opportunity for Arin to audition for a band. Arin was happy at TRX at the time so declined the audition.

Things went quiet over the coming months until Mike got back in touch again to try and persuade Arin to audition again. This time around he mentioned the audition was to join Avenged Sevenfold.

Arin decided that if he was going to give up his career at TRX for anything, Avenged Sevenfold was big enough. So Arin took the audition and got the job.

It was announced in January 2011 that Arin would be touring with the band from that point. In 2013 Arin was confirmed as a full-time member.

Arin recorded drums for the album “Hail to the King” which was released on 27th August 2013. The album was the first to be released without any contribution from The Rev. The album went to number one in the USA, UK and many other countries.

The band proceed to tour the world headlining festivals and arena headline shows.

After this, the band planned to create another album but decided Arin would not be the drummer. Arin was fired by the band and this was announced in July 2015. Avenged Sevenfold cited the reason as creative differences. Brooks Wackerman was later announced as the new drummer and full-time member of Avenged Sevenfold.

After Avenged Arin quickly joined the band, Islander. At the time Islander has gone through a major lineup change and upon seeing the news of Arin becoming available they knew they wanted him in the band.

Arin recorded one album with the band, “Power and Control” which released in 2016. Arin was only a member of Islander for a couple of years departing in 2017.

Since Islander Arin has been very quiet on the band and drumming front. As Arin has already wanted to be a family man it seems he has stepped away from touring and is focusing on that.

Looking at his Instagram he seems to have become an apprentice at Tuttle Handcrafted Guitars.

What gear does Arin Ilejay use?

As he toured with one of the biggest metal bands in the world he has a pretty good list of sponsors. Let’s have a look!

Arin has mentioned in interviews that he likes to have a symmetrical setup to allow him to perform cross-handed playing to enhance the live performance. This is visible in his cymbal set up on the kit.

Find out more about Arin Ilejay

Arin is on most social platforms although he is very quiet and not posting often. To keep up to date with what he is up to check out the links below.

Arin Ilejay is a great drummer who was faced with one of the biggest challenges in metal drumming. Filling the shoes of the much-beloved Rev. Almost an impossible task.

I think his live performances were full of energy with extremely tight playing. I enjoyed his drumming on “Hail to the King” but it was a shame Arin didn’t get to put more of himself into that album. From the outside, it seemed more like he was a session drummer there with a job to deliver rather than having creative input.

What do you think? Do you think Arin could have done anything differently?

Whatever Arin does next we are excited to see. Hopefully, he will get behind the kit again but who knows.