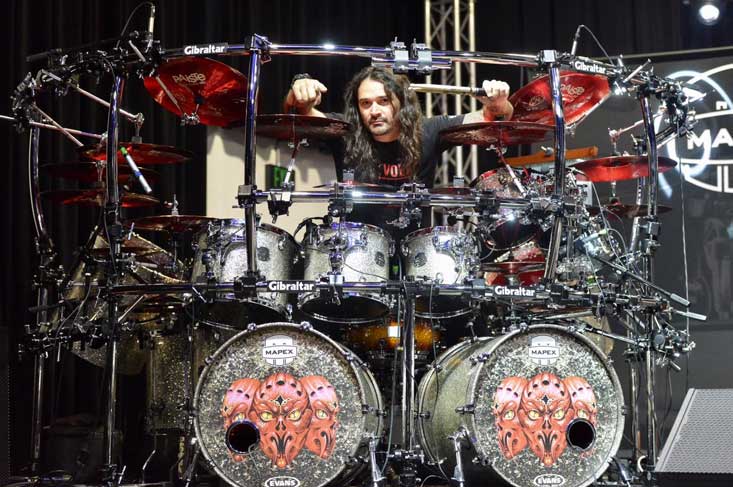 If you are interested in metal drumming it is highly likely that at some point you will have come across Aquiles Priester. His playing is flawless and he makes it look easy. It is a sight to behold.

Let’s find out more about Aquiles Priester and his drumming career so far.

Who is Aquiles Priester?

Aquiles Priester is a Brazilian drummer born on the 25th of June 1971. Although Brazilian, Aquiles was born in Outjo, South West Africa (now Namibia) to Brazilian parents before moving to Brazil in 1977.

Aquiles was originally introduced to music at the young age of four in the form of a jazz ensemble that performed on television. It wasn’t until 1985, where he attended Rock In Rio that he decided he wanted to become a drummer.

In the early days, Aquiles didn’t have much to work with as he learned. He had a small kit that consisted of a snare, bass drum, hi-hat, cymbal mounted that he mounted from his roof and a tom that he borrowed from his school. If that doesn’t scream dedication and passion I don’t know what does!

Aquiles got his first break when he was discovered dubbing drums on a local TV broadcast. The group Tropical Band were impressed with his performance, even though it was mined, and offered him the chance to come and perform with them. Aquiles accepted the gig and was thrown in at the deep end having to play a show on his first time meeting the band.

This pattern formed the very early days of Aquiles drumming journey. Being discovered performing with one act and being asked to join another. Things weren’t easy for Aquiles though as it was hard to find a band committed enough or making any serious progress.

One thing was certain during this time though. That was his love for the band Iron Maiden and Nicko McBrian becoming his biggest influence.

During this period whilst trying to make it as a musician Aquiles decided it was time to take some lessons seven years after starting to play the drums.

This isn’t common as most musicians will start with lessons and then proceed to pursue drums as a profession. Professional drummers do take lessons though but this is more often in the form of a coach who helps you push your learning.

Aquiles Priester took lessons from Mimo Aires, Thabba and Kiko Freitas. As well as teaching him the technique behind the kit, they taught him what it was to be a professional musician. This is often overlooked when learning an instrument.

At the age of 24, Aquiles faced something that most musicians face in their career. You know you have the passion and drive but you haven’t had your break yet. You can’t afford to keep up the lifestyle you are living so you have to make the tough decision to get a “reel” job.

Aquiles made this choice and put drums on the back burner making it his hobby. This is what he did for a couple of years and was happy during this period, although something was missing from his life.

In 1997 Aquiles formed Hanger. Originally they were a metal cover band but proceed to write original songs. Something was different with this band though. Each member was dedicated and they had a vision of where they wanted to go. This could be a big opportunity.

Hangar proceeded to build up a good local following and had the opportunity to open up for Brazilian melodic metal band Angra. This was the bands biggest show to date. After this, they went on to record their debut album “Last Time” which was released in May 1999.

In late 2000, talks begin on the chance for Aquiles to audition for Angra. The band that inspired him and that he has previously supported with Hangar.

After much back and forth and some tests to ensure he was a good fit, Aquiles was in.

Angra was the big break Aquiles Priester was looking for. Aquiles recorded 5 albums during his time in the band and toured the world. Aquiles was a member of Angra up until their hiatus in 2007.

In between touring with Angra Aquiles found the time to work on his drumming profile. He released his first drum DVD in 2004 entitled “Inside My Drums” and held over 100 workshops.

When in a successful band, it can become common for drummers to forget to raise their profile. Performing workshops and creating a DVD was a very smart step for Aquiles.

Aquiles then went on to create his first book “Inside My Psychobook – 100 Double Bass Patterns” in 2007. This book focused on developing double bass.

By raising his profile, Aquiles got the opportunity to perform at the Drummer Live Festival in London and host workshops across Europe and South America.

Getting back on the road

After his time with Angra, Aquiles went back to work with Hangar as well as taking on many other musical projects. This includes:

Aquiles Priester was also invited to audition for Dream Theater upon the departure of Mike Portnoy. Unfortunately on this occasion, Aquiles wasn’t chosen and the band went with Mike Mangini.

What is unique about Aquiles Priester’s drumming?

Aquiles Priester has a few distinct characteristics in his drumming.

The first thing you will notice is how relaxed he is looking. He never seems to be straining himself whilst playing and he will normally be chewing gum. He is comfortable and in the zone.

Secondly, you will notice how tight his playing is. He has extreme precision even when playing complex double bass patterns at high tempos. A lot of practice must go into everything he performs to be this precise and relaxed.

Aquiles also fits a lot of open-handed patterns into his parts. Either this is between his two rides, various toms or effects cymbals. Sonically, this is what makes him stand out from other drummers.

As soon as you see a picture of his kit, you instantly know it belongs to Aquiles Priester.

Besides it being massive it has a few distinguishing features.

The cymbals are almost symmetrical and are set up in layers. At the top, you have all the cymbals for the big hits. The chinas and crashes. You then have an effects layer full of splashes and mini chinas. And at the bottom, you have the “beat” layer which consists of a hi-hat and ride each side.

There is also some symmetry to the tom setup. There are floor toms and gong drums on each side of the kit. The toms aren’t symmetrical in sizes as they go smallest to largest left to right but there are fairly symmetrical in placement.

When I look at Aquiles Priester’s drum setup it makes me think of a modern version of Nicko McBrian’s setup from Iron Maiden. You can tell this is one of his inspirations.

The latest version of his kit also has some stunning colour combinations going on. Vibrant red cymbals and red drumheads against a silver sparkle finish kit. Beautiful.

Let’s look at the gear he uses:

That is an impressive list. It is interesting to see that although he uses Mapex drums he doesn’t use the hardware, instead opting for Gibraltar and DW Pedals. I guess if you find something you like you stick with it.

Like most successful drummers Aquiles has had the chance to work with manufacturers to create some signature products. Let’s have a look.

Aquiles is known for his open-handed ride patterns. If you want to get the same sound as him you are in luck. Aquiles worked with Paiste to create the 18″ 2002 Giga Bell Ride. Although smaller than the average ride these feature a large bell and have a great ping sound. It also has a unique black dipped finish.

Aquiles can be found in several places across the web. More sure you check out the links below to find out more.

Aquiles Priester has had an inspirational journey. Once full of highs and lows, passion and determination.

He has achieved what most professional drummers aim to achieve and more. He is known as one of the worlds best metal drummers as well as being an accomplished instructor. What else could a drummer ask for?

I am a big fan of his style of drumming. The combination of fast double bass, big tom fills and interesting grooves are always exciting to watch.

I can’t wait to see what Aquiles Priester gets up to next.