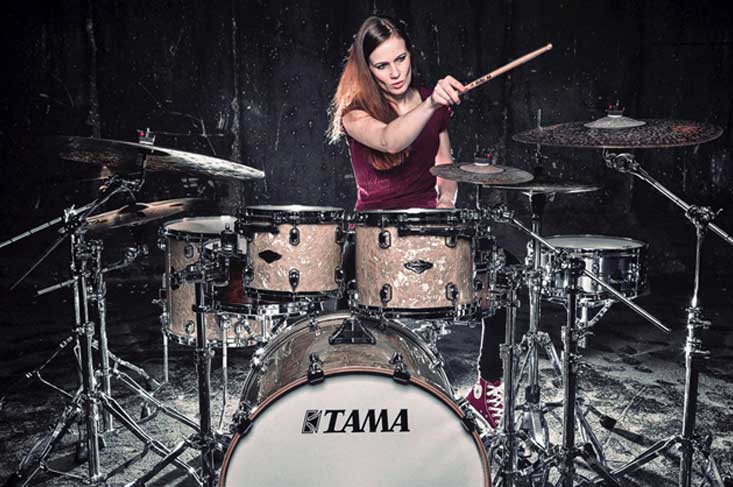 Anika Nilles has taken the drumming community by storm over the past 6 or so years. A true drumming powerhouse full of groove and chops no matter the time signature. It is easy to see why Anika Nilles has become a favourite drummer of many players.

Let’s find out more about Anika and her drumming career so far.

Who is Anika Nilles?

Anika Nilles is a professional drummer from Aschaffenburg, Germany born on the 29th of May 1983. Anika is best known for her drum performances and her original music.

Where did it all begin?

Anika first started playing the drums at the age of 6. Her father taught her a groove and that is where the passion began. Anika had a family full of drummers so she was surrounded by inspiration.

Anika was determined to give becoming a musician a try when she finished school.

A diversion from drumming

Like many people, Anika’s parents warned her about becoming a musician and to get a “real” job. Anika did this and studied social work for the next 5 years.

After her studies, she accepted a job at a preschool and soon when on to become the head of the preschool.

Throughout this time Anika was still taking lessons and playing in bands. The passion was still there to become a musician.

At this stage, she was in her mid-20s and started doing private drum tuition. Anika was lucky as she was one of the only private tutors in her area and soon took on enough students to go part-time with her preschool job.

Anika wanted to do further studies to help advance her playing. She auditioned for a place at a vocational music school. Underprepared for the audition Anika failed.

Although this was a hit for her confidence, she started taking lessons from a nearby drummer, Claus Hessler.

Claus greatly helped Anika improve her theory and skills as well as introduce her to a drumming program.

This program was full of drum teachers and drummers and helped inspire her to continue her journey.

As well as private tuition, Anika managed to launch her workshops as well as starting to get some gigs. She was now a full-time drummer.

This didn’t stop Anika from wanting to progress. Anika decided to apply for the Popakademie Baden-Württemberg in Mannheim to study popular music and music business.

This time she was successful.

This wasn’t an easy time for her as she was surrounded by incredible musicians that filled her with self-doubt. So much so, she also quit during the course but due to some encouragement from her parents.

Anika went onto complete the degree and proceed to do clinics.

When Anika started to perform clinics the self-doubt started to come back. Anika suffered badly from stagefright which would cause her to struggle to be present and fall back on what she practised.

People still loved the performances but it left Anika feeling like she had just sucked and put on a poor performance. She was hard on herself.

To overcome the stagefright and doubt, Anika worked with Norbert Saemann from Meinl. Norbert would record the clinics, then after the performance with Anika, they would review the performances.

Slowly but surely, the confidence came back.

This interesting technique is also used by other drummers. For example, the excellent Benny Greb.

Anika Nilles is also a songwriter and has been releasing songs during her professional drumming career.

Anika first released the track “Wild Boy” in October 2013 on her YouTube channel. The follow-up song was “Alter Ego” released in February 2014.

The music videos for both of these tracks are of Anika playing the drums in the studio. Anika writes and produces the music with guest musicians playing the parts.

These videos racked up millions of views and gained Anika recognition globally. This led to clinic performances across Europe, American and China in 2015.

Anika released her debut album “Pikalar” in 2017. The album consists of 10 instrumental tracks.

Have a look at this video of Pikalar performed with hand band Nevell.

Most recently Anika released the album “For A Colorful Soul” in 2020. This album features her full time touring band Nevell. The group consists of Patrick Rugebregt on synth and key, Jonathan Ihlenfeld Cuñado on bass and Joachim Schneiss on guitar.

As well as performing her music they are also her full time touring band.

Anika Niles has released a few different products to help you improve your drumming or to learn her songs.

This features several practice pad exercises for drummers who don’t have a huge amount of time to practice behind the kit and want to improve. Or for those drummers who want to dive deep into improving advanced hand technique.

A few things make Anika Nilles drumset different to that of a standard kit.

The second thing you will notice is the toms are reversed. So they go from low to high rather than high to low. Anika mostly plays the kit as a single tom setup but the extra high tom is there for more options.

In some configurations of her setup, you will also notice that a second snare is used in place on the floor tom. This is tuned low and is being used as a snom drum. This gives you a floor toom or snare sound depending on if the wires are on.

As a very popular drummer, Anika has a few signature products worth checking out.

These sticks are made from a lacquered hickory. They are based on a standard 7A but with a few tweaks.

These tweaks help Anika sharpen up the sound she gets from the kit whilst allowing for control at higher tempos.

Many drummers have signature practice pads but many just consist of a standard pad with custom graphics.

Not with this pad…

This has been done so that you can hear what is happening between hands from the different tones. This is a great practice pad for drummers who tour a lot and don’t get as much time behind the kit as they would like.

This is a unique sounding stack developed by Anika with Meinl Cymbals. It is 18″ and features two cymbals. A thin crash on the bottom and an 18″ trash crash on the top.

When closed tight it gives you a deep hi-hat sound to add contrast to your main hi-hat. When lose you get a deep trashy sound as you would expect from a large stack.

You can find Anika in several places on the internet! Check out the links below.

There is no doubt that Anika is an incredible player. I think her story is very inspiring. It shows you that passion and determination are incredibly important, but so is being able to see where you are weak and take the time to improve those aspects.

Anika has pushed through so many boundaries that would have stumped other drummers and it is great to see that she has succeeded.

I can’t wait to see where Anika goes next on her drumming journey.