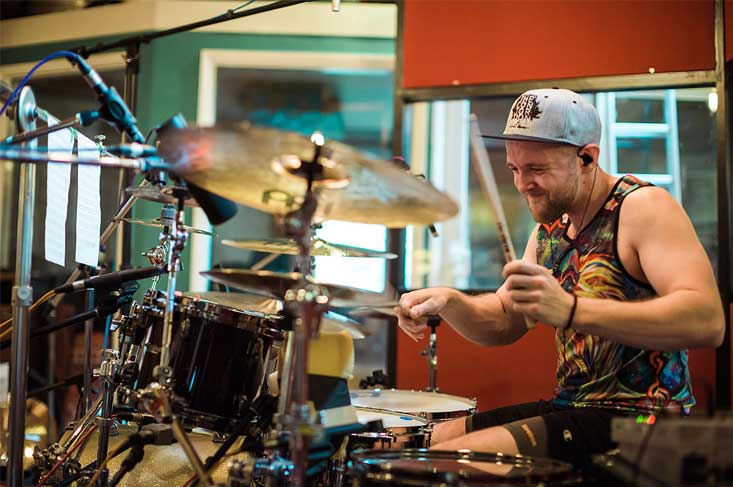 Alex Rüdinger is a powerhouse in metal drumming. You rarely come across drummers with such power, accuracy and technical ability but Alex Rüdinger has it by the bucketload.

Between his touring, studio work and YouTube channel, Alex is a very busy drummer than you need to know about.

Born 18th November 1991 in Frederick, Maryland, Alex has been playing the drums since age 12. After playing on the local scene in his teen years he knew that he wanted to go professional.

The thing that separated Alex from many other drummers was his dedication and use of technology to make it happen. Starting his YouTube channel in 2006, this became his way to audition and be seen by bands potentially looking for a new drummer. This approach led to Alex achieving his first break filling in for Threat Signal when he was 18. He toured with them for a year and recorded their self-titled album before departing. Since then Alex has gone on to perform and record with a staggering amount of performers.

One of the most notable things about Alex Rüdinger’s playing is his open-handed style. This allows for some great beats across the kit as well as visually impressive fills that sweep from the rack toms, then between floor toms on either side.

As mentioned previously, Alex Rüdinger has successfully used his YouTube channel to launch his professional drumming career. With his content creation, you will see it is primarily incredible drum covers.

Alex shows off his incredible precision and chops throughout the videos which cover everything from death metal to extremely complex technical arrangements.

Even though Alex is a mind-blowing drummer, he still seems to be getting with each video he is releasing.

Who has Alex Rüdinger played the drums for?

Alex has played with a staggering amount of performers over his career since his first break in 2010 with Threat Signal. Since then he has recorded and performed with several different bands including:

What gear does Alex Rüdinger use?

Alex Rüdinger has an incredible selection of kits so it is hard to narrow this down to just one… but in general, here is the setup:

Where can I find more?

Luckily for you, Alex Rüdinger can be found at multiple places across the internet. Check him out on the links below:

Alex Rüdinger is a beast of a drummer. He seems to be able to do it all and make it seem effortless. Even if you aren’t a fan of metal drumming we highly recommend taking some time to look through some of his performances. They are incredible but beware… they will either motivate you to want to get better or to just give up because you’ll never be this good. Jokes aside, make sure you check him out.