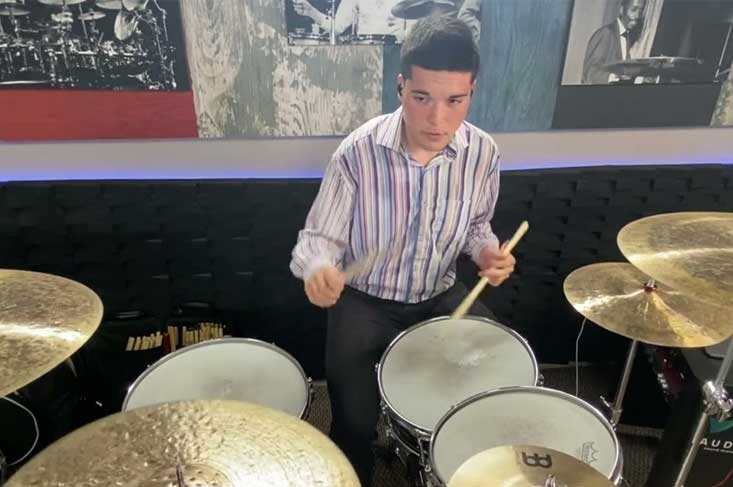 Greyson Nekrutman is a drummer who has exploded in popularity during 2020. His determination and passion ooze out of every drum performance. It is clear to see why he has amassed such a following in such a short time.

Let’s find out more about Greyson Nekrutman and his drumming career so far.

Greyson Nekrutman is a drummer born on the 13th June 2002 from Long Island, New York, USA.

Greyson started learning drums at the age of 4 with tutor Justin Gallow.

Justin would teach Greyson a bit of each different genres. Latin, jazz, rock etc but never diving too deep into any of them. Justin wanted Greyson to become an all-around drummer with knowledge of everything.

This gave Greyson a strong foundation and knowledge from which he could build upon. When he was ready, he could deep drive into particular styles and narrow his focus.

As Greyson got older he focused a lot on rock and prog-rock becoming a big fan of bands such as the Dave Matthews band.

It wasn’t until later jazz started to become of interest. At first, like many drummer Greyson had the impression jazz is this quiet genre with a lot of brush playing and it wasn’t of interest.

When he discovered drummers like Buddy Rich and big band jazz, it all changed.

Greyson Nekrutman is currently studying at The New School in New York City.

One way Greyson Nekrutman has improved his drumming is by studying his influences on a deep level.

Not just a bit of reading, learning some songs and moving on.

Really deep research into what drove these drummers. What were their inspirations? What about their style is unique to them?

Greyson will call around to find people who knew the drummer he is studying. He wants to know them and what drove them. How did they develop their style? What did they listen to?

Greyson wanted to be able to recreate these drummers. This has led to many comments online about how it is these drummers reincarnated.

Greyson discovered in school that he had a photographic memory. He could take maths formulas, remember them and recite them back in exams.

This memory has helped him create some of his most popular videos to date.

In these videos, you will see Greyson reenact a drum performance, part for part with all the nuances. It is impressive to see.

Of course, the photographic memory helps him digest and memorize the parts faster than the average drummer but the hard work and practice are still needed to play everything perfectly.

Like many drummers, Greyson has faced challenges trying to get his career going. Greyson had a unique challenge though.

There is no doubt about it, Greyson is an incredible drummer. But with him being so talented at a young age, it made it hard for older peers to accept him.

No matter how he played, he would get criticised. Even when he would perform a classic drum solo perfectly note for note.

It was either too hard, too soft, too busy… you get the point.

Sometimes older drummers feel like because they have been doing it longer they are on a superior skill level and it can create egos. Even if you are the better older player, you should be helping and encouraging the fresh up and coming talent.

Of course, with being older you have the respect of your peers and career experience. Only time can get you this.

This issue has even led Greyson to not be invited to an audition for a college he applied for. Even though, he had the skills and drive to thrive.

This fueled Greyson to go, “I am going to play the way I want to play and if you have an issue with it, sorry, I don’t care”.

This is when Greyson started releasing his incredibly popular play-along videos. In these videos, he will match classic drum performances note for note.

These prove his skill, dedication and passion for the great drummers that have come before him.

The main thing you need to know about Greyson is that he is a hard worker. He practices, a lot!

While most of the world shut up shop when Covid 19 struck in 2020, Greyson got to work. Practising on average 8 hours per day over two or three sessions.

To push through long practice sessions Greyson uses several methods to keep his focus up. When working on difficult pieces he will slow down the songs and parts so he can fully learn each note.

If he feels his mind starts to wander he will crank up the tempo. This does two things. It switches up the challenge making the brain reengage with the task at hand.

It allows Greyson to determine how close he is to complete a section. This allows him to then dial back the tempo and refocus on the bits that need work.

If this doesn’t work, he will simply step away from the kit and come back to work on it again after a break. Sometimes your brain needs a break to process what it has been working on.

Greyson Nekrutman had a strange introduction to the power of what social media can do for drummers. Initially, his mom would get him to record drum videos so she could upload them and manage his profile.

At the time Greyson didn’t realise the power social media could have. When you have the talents he has, you are going to stand out from the crowd and gain attention.

Greyson soon realised the power and it became a serious focus.

Initially, Greyson was uploading playing to songs that he wanted to because he enjoyed them and it is what he wanted to hear. Logically, this always seems like the best move but what happens when these videos don’t get a lot of views. You have invested a lot of time and effort for little reward.

Once Greyson realised this, he decided to take it seriously and work extremely hard on the types of videos people want to watch.

That was jazz. People loved the content and it created space in the market for him. Not many people do jazz drumming videos so this created a space for him to gather an audience.

Greyson is extremely focused currently on using social media to launch his career and get his name known. He knows that is the goal and is making the most of it whilst the world doesn’t have many other opportunities.

When the world reopens his socials will transition with him. They will act as an insight into his career and his drumming journey. With the occasional cover video for good measure!

One of the things Greyson gets asked a lot is about his left-hand technique. It is a variation of a classical grip.

Greyson is a believer in doing what feels right and works for you, not use technique X or Y. This has led to this hybrid style.

Depending on the tempo and the application on the kit varies up the grip.

Here is a great video of Greyson Nekrutman explaining his left-hand technique.

Greyson plays a fairly minimalist drum kit but he plays some beautiful gear.

His setup is very classic. 1 tom, 1 floor, 1 kick and 1 snare. Hi-hat, ride and crash. Occasionally you will also see a splash or some extra toms.

Greyson can be found in several places online. Make sure you check him out on the below.

Without a doubt, Greyson Nekrutman has a bright future ahead of him. Being this driven and talented at such a young age places him in a perfect position to have a long and prosperous career.

When the world reopens it will be interesting to see if Greyson lands any big gigs that will open him up to the world of touring and recording.

No matter what happens, we can’t wait to see where his journey goes next.